Every four years there’s a World Daffodil Convention or special tour. It alternates between the northern and southern hemispheres. In the recent past the Convention was in Christchurch, New Zealand in 1996, in Portland, Oregon in 2000, in Melbourne, Australia in 2004, touring the U.K. and Holland in 2008, and in Dunedin, New Zealand in 2012. So the honor comes around every 16 years to a particular country. Thus in 2016 it’s America’s turn. (In 2020 Australia will be the host).  The 2000 Convention was in Portland, Oregon with the Oregon Daffodil Society as the local organizer of the event. One of the products of that Convention was a two hour VHS video tape of the activities. We’ve had one of those tapes digitized so that we can preserve it on DaffTube. VHS is lower resolution than standard definition television, so there was no point making a high resolution digitization; we’ve digitized it as 320 x 240. Also, VHS has a 4:3 aspect ratio, i.e., squarish rather than wide screen. Many parts of the VHS video were overexposed, especially of flowers against a dark background; however, there’s nothing we can do to get the details back. A difference between our digitization and the VHS tape is that we’ve replaced some background music with Garage Band sound loops so that we don’t violate somebody’s copyright. Fortunately, this was only in the part of John Pearson’s presentation when he wasn’t speaking. As two hours is quite long for an online video (unless it’s a good movie), we’ve divided the video tape into five parts, each under a half hour. If you attended the World Daffodil Convention in 2000, you’ll enjoy watching these videos to see how many people you recognize (or what they looked like in 2000).

If you want to download the videos to save on your computer or other device, click on THIS LINK to go to the download page. Rather than the assortment of resolutions and data rates we’ve used for high definition videos, this page has links only to the 320 x 240 files shown by the viewers. They’re available in MP4 and WEBM formats.

Viewing the Videos On Line 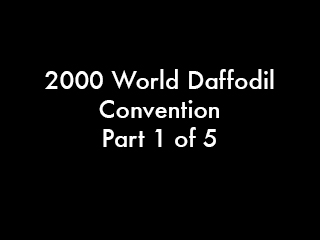 Part 2 of the 5 parts has the sections titled “Friday Dinner Program” and “Hybridizers Panel”. The playing time is 27 minutes and 24 seconds. 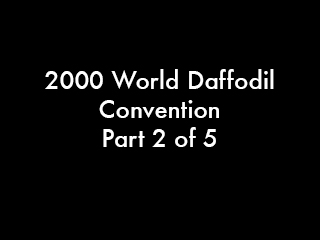 Part 3 of the 5 parts is the single section titled “Farm Tours”. The playing time is 19 minutes and 58 seconds. 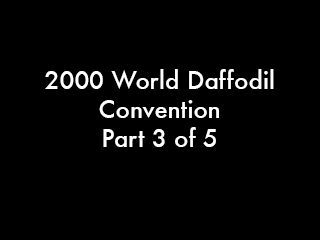 Part 4 of the 5 parts is the single section titled “Saturday Dinner Program”. The playing time is 27 minutes and 23 seconds. 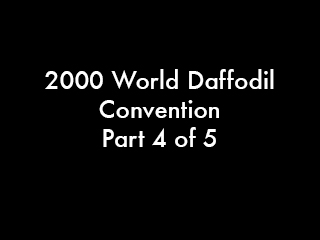 Part 5 of the 5 parts has the sections titled “International Judging Competition” and “Finding Narcissus atlanticus”. Apparently only a very short part of John Blanchard’s talk on searching for N. atlanticus was used in order to keep the entire program within the 2 hour limit of a VHS tape. The playing time is 18 minutes and 52 seconds. 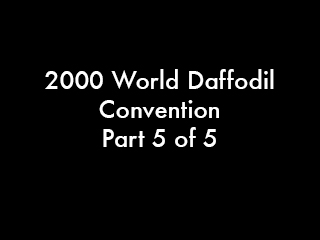